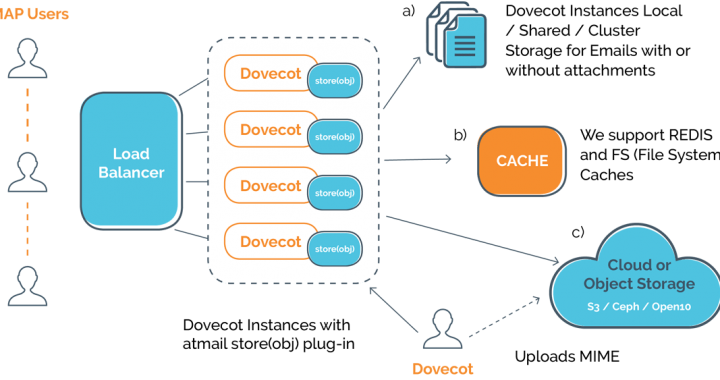 After months of hard work here at atmail, we’re excited to announce that last Friday we released our new atmail object storage plugin called store(obj) obj.store(),  which is based on Dovecot open-source.

“What is object storage? And how can it help me?”, you ask.

Great questions. Let’s walk through it…

What is object storage?

Object storage is an alternative to block storage or traditional file system storage, with high scaling, availability and low cost as its key focus points. It brings simplification of current file system storage from a directory structure of traditional FS to a flat list of ‘buckets’, that store information using unique IDs rather than filenames.

This means for each piece of data stored, the amount of overhead data (metadata) required is significantly lower than traditional. Object storage systems store this metadata with the object itself, which makes it very easy to scale. High availability is provided by replicating the objects across many geo-locations and disk drives.

Our atmail store(obj) is a plugin for atmail mail server, which is based on Dovecot open-source and works like this: 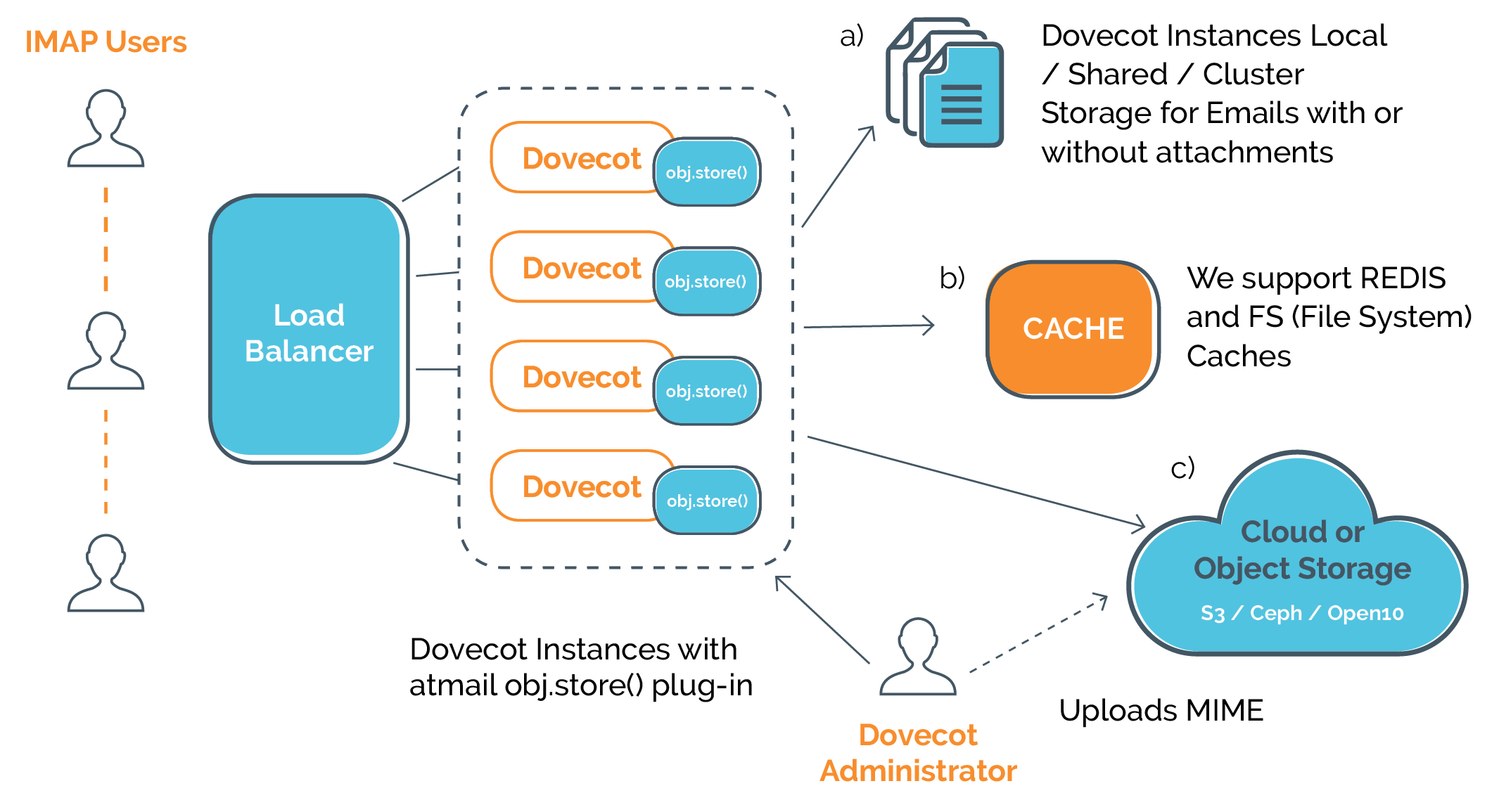 Why is object storage a good thing?

Object storage is a very good thing for large organisations because it reduces your exposure to the inherent risks of storing your own data. Its high availability and redundancy give protections that traditional filesystems require as an extra layer. This keeps costs down. And who doesn’t want to keep costs down?

If you need a quick checklist on the pros of object storage, it would read something like this:

What are the cost savings with object storage?

Here is an example of the bottom line savings that could apply with atmail’s object storage plugin, obj.store(): 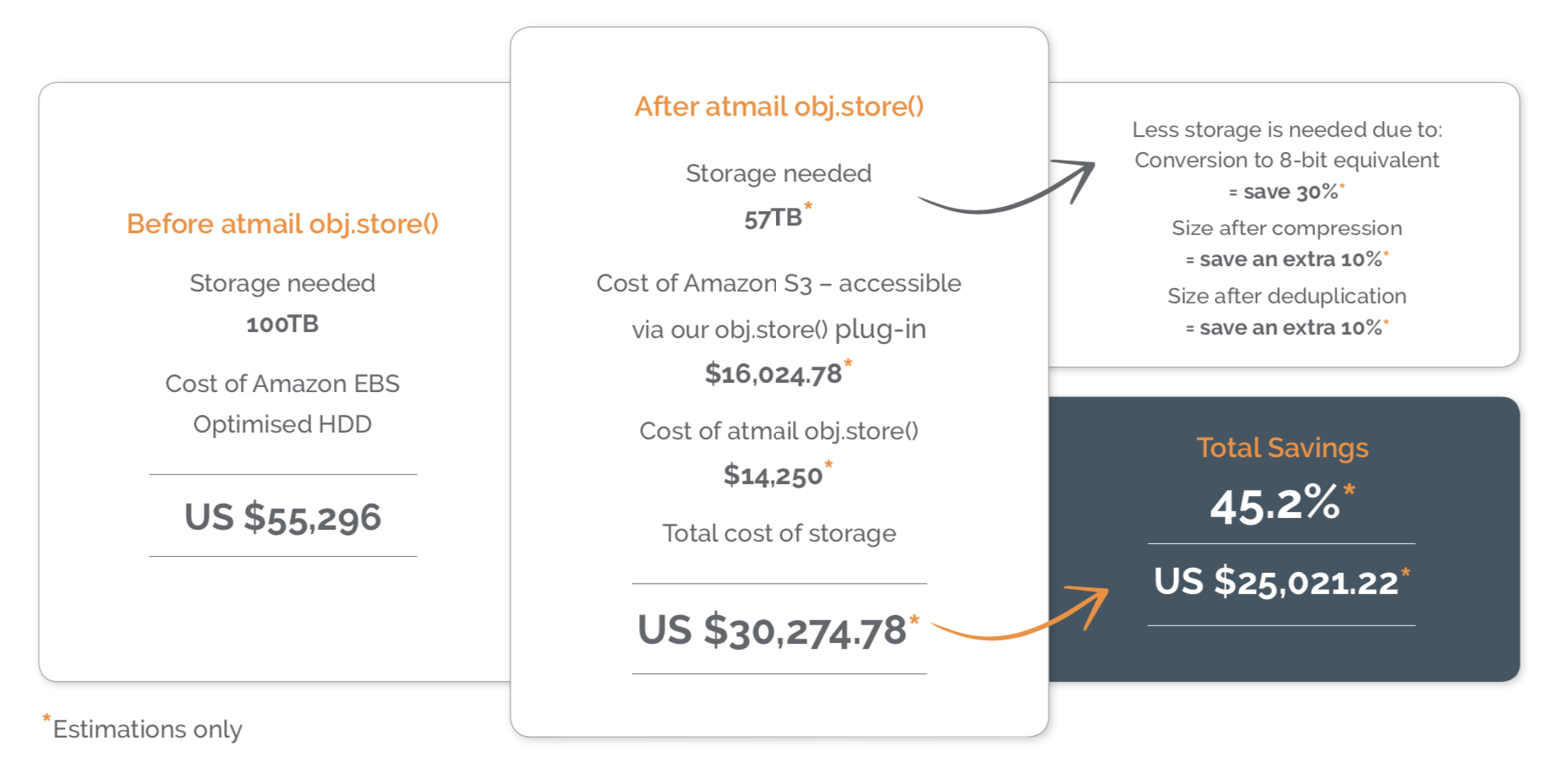 No. It has been in development for a long time. The rise in its popularity has been spearheaded by Amazon S3. It is so popular now as a term, it squarely sits inside the ‘pull’ marketing type where administrators often demand object storage integration. It’s certainly a hot topic right now.

Who came up with the concept of object storage?

Whilst object storage might have only gathered some serious steam in the last few years, the origins of object storage can be credited back to research on Network Attached Secure Disks led by Garth Gibson in 1995. That was the research that first promoted the concept of splitting less common operations (such as namespace manipulations), from common operations (such as read and writes), to optimise the performance and scale of both. Source

From 1999 to 2013, at least $300 million of venture financing was related to object storage. Given that this amount doesn’t include the large sums invested by large global players such as Google, Microsoft, Amazon, Red Hat, OpenStack and more, it definitely indicates that object storage is a rising force.  Source

What are the differences between object storage offerings?

Being a plugin for Dovecot open-source, atmail’s obj.store() plugin allows you to use technology that you already know – and it also supports multiple cloud storage and cluster filesystem vendors.

What are some benefits of atmail’s object storage plugin?

How long does it take to set up atmail’s object storage plugin?

It’s a very quick process. If you don’t yet have an account with a S3 compatible provider, simply visit a provider and set up an account with your email and details. Your buckets are then just a few clicks away from being created and usable.

For more information about atmail’s other email solutions, simply click on atmail on-premises or atmail cloud.

Note: We changed the name of our product from  after launch.

Feel free to shoot us a question at [email protected] and we’d love to help!